The Birth of the Conceptual Bigfoot

Bigfoot shows, in recent years, have catapulted to the forefront of the public consciousness. What exactly makes Bigfoot such a focus for all the fanfare? The very subject of Bigfoot is one of very scant hard evidence. So…what is it that people are so enamored with?

Bigfoot has the distinction of surviving in two realms at the same time. The first realm is the realm of hard proof. While there is not a lot of hard proof, it is not without at least SOME evidence that makes a person scratch their head. Several films have been made with at least one showing some decent images which are good enough to determine that it’s either a Bigfoot or someone trying to look like one. In other words…not a mistake.

A second realm, where most aficionados and newbies are at, is the realm of the conceptual Bigfoot. Generally the less hard evidence there is, the more concepts flourish. A concept is simply an idea in your head about a certain subject. Some concepts are formed quickly and disappear quickly. Here’s an example of a concept. “Bigfoot are immune to snake venom.” Where did that come from? Well…how many Bigfoot have we seen dead from snake bite: “someone might say”? Well…none actually. Bingo says the conceptual mind. But…how many Bigfoot have we seen dead from being run over by trains? The conceptual mind may deduce that Bigfoot will not cross railroad tracks. There is no limits to what can be learned about the conceptual Bigfoot, nor is there a limit to how wrong the concepts might be.

People, who are pursuers of the conceptual Bigfoot, tend to also pursue the more famous of the Bigfoot pursuers. Perhaps they feel that these people may be a link for them to the other realm of hard proof. “I’ll follow him or her because they saw Bigfoot, or, they filmed Bigfoot, or in some cases, they shot Bigfoot.” This has never proved fruitful, and in many cases leads to disappointment.

Sometimes the hard evidence spawns a universe of concepts. This is what has occurred with the Patterson Bigfoot film of 1967. Less than a minute of film has exploded into an ocean of concepts about what a Bigfoot is, how it lives, what it eats, and the list goes on for miles. Even the academic world has fallen prey to this type of thing. Here’s an example: “Bigfoot is a giant bipedal ape.” Why is that? “Because I see it in the Patterson film.” Can a concept be based upon a hard evidence event? Well…in some cases, but in most cases people are more in love with the concept than any hard evidence there might be. The concept that Bigfoot is an ape is an old one. When the Patterson Bigfoot film came along, people were so enamored with the concept that the film and the subject of the film was retailored to fit that concept. How was this done? By using bad copies of the film where 2/3 of everything on the film was ambiguous. Then an overemphasis on the person’s level of expertise and education was followed by session of training the mind to see the ape. In recent years, however, better versions of the film have surfaced and it has become apparent that the realm of hard evidence, at least for the Patterson Bigfoot film, does not lean toward any ape. All the tools are there to describe a human being. Large size does not disqualify it as a human, neither does unusual Body hair. All other features are there exactly as are the features of a human being. Anything beyond that is conceptual. Concepts should never trump hard evidence.

Science is the “truth…in it’s simplest form.” If a person tries to pass off a concept as fact by the over use of scientific jargon, it is a good sign that the person is enamored with that concept and is not likely to follow facts or even acknowledge them. They may even go as far as to try and destroy hard evidence so that their concept can flourish. They will indeed throw out the baby with the bathwater, and not even blink an eye. Beware of such ones in the academic field. They love to write papers and acquire grants. They are marching madly to nowhere. Don’t get in their way.________________M.K.Davis

Here is another view of the pendulous nature of the Patterson Bigfoot.

Watch the dynamics of the breasts in this brief clip from the Patterson Bigfoot Film. Click on the image to enlarge.

M.K.Davis explains why you should not wake up a sleeping Almasty.

This is a blow up of what appears to one of the eyes. It’s a large eye at that. Some native peoples refer to Bigfoot as “moon eyed”. Used by permission of the Dept. of Hominidology. Russia. Click on the image to enlarge.

Can you see the eye? Look for it on the frame that delays longer.

One frame delays more than the others. Look for the eye. Used by permission of dept. of Hominidology. Russia. Click on the image to enlarge.

A dramatic scene caught in a series of stills from a score of witnesses, this Siberian Bigfoot or Snowman, makes it’s way through a snow field and heavy brush. Use by permission of Igor Bourtsev dept. of Hominidology. Russia. Click on the image to enlarge.

Specially filtered for higher contrast. Click on the image above to enlarge. Used by permission of Igor Bourtsev, Dept. of Hominidology. Russia. 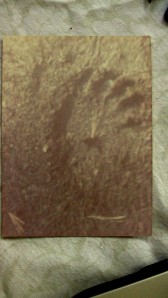 Here’s an example of the front part of the foot being used to make a half track. I believe that they are aware of their prints and have developed techniques for deceiving would be trackers. Notice the previously made half track behind the subject. Click on the image to enlarge

This is a frame from the Patterson Bigfoot film. Notice as the animation runs that the big toe is held straight up. When she puts it on the ground the big toe will not make an impression. The foot bottom is also bent to the inverse. It is convex in its shape. When the foot is on the ground only the front part of the foot will touch. I believe that this is deliberate in order to mimic the print of a bear. Take a look at the photograph here. It was taken by a bear hunter at Bluff Creek California. This bear hunter had seen the Bigfoot and saw it make the print. As you can see, it is missing a big toe and is only the front part of the foot. Perhaps it’s the same one in the animation.

Watch the inverse bend of the foot as she picks her big toe straight up.